I so wanted this song to be an anthem to get behind, but it turns out Lily Allen’s It’s Hard Out Here epitomises the biggest problem within the feminist movement: racism.

Update: Lily Allen has responded to critics who argue her song is racist, claiming in a short blog post that her motivations were well-intentioned and she did not mean to be racist. However, as Jezebel points out, an artist’s intentions and the way an audience interprets them do not always align. I’d urge you to consider how Allen might have communicated her messages without – as Lily Edelstein points out below – effectively using black women as ‘props’. Perhaps read about how Women of Colour feel about Allen’s ‘satirical’ piece before getting angry. Parts of her song / music video are brilliant. But that does not mean we cannot be critical of those parts which may not be.
-Hayley (Ed.)

The song seems promising from the outset: an impressively disturbing scene of liposuction where Lily is surrounded by men who are blatantly misogynistic and sizeist. “How do people let themselves get like this?” Her gross white middle-aged manager asks. “Um, I’ve had two babies,” she responds. This short scene aptly captures the pressure that Lily must feel as a woman in the music industry, and it’s probably the most effective part of the video, because she liberates herself from the revolting sexism it creates by getting up and singing.

The fact that she represents the sexism and then rejects it is significant, because that rebellion (or lack thereof) makes all the difference in her attempts to comment on contemporary racist representations of women. Lily’s treatment of the Women of Colour in her film clip is a classic case of ironic racism, where she claims to be progressive and sarcastically challenging the norms, but she doesn’t do anything more than present them. The dancers around her are used like props, especially when she slaps them and giggles (gross). Like with ironic sexism, ironic racism is an act that says, “I know you know that I know I’m being racist, so it’s not really racist.” It is racist.

Allen’s use of black women dancers as props directly references Miley Cyrus’s recent racism, combining cultural appropriation with objectification of black women in particular). To actually challenge oppression we need to change the dynamic. Lily could have teamed up with a WoC and respected her voice and experience. As zombiecate said of Miley, instead “she has prioritized her own agency and independence over the dignity of black women and black culture.”

This represents a fundamental problem in feminism, which has been a predominantly middle class, white woman’s movement for about a century now. It’s understandable that many WoC want nothing to do with feminism when the only empowerment celebrated for women comes at their expense. It’s serious, and for the white feminists out there, it’s something we need to tackle. We need to listen to WoC and we need to change.

In talking about the lyrics, there are some gems. She spits in Robin Thicke’s face pretty effectively with the line, “have you thought about your butt? Who’s gonna tear it in two?” She talks about a glass ceiling and slut-shaming, but I’m drawing a big question mark over the word “bitch”. Reclaiming slurs is a hard thing to do and it takes a really long time as well as solidarity with all women.

Ultimately, I can’t not like the line, “Forget your balls and grow a pair of tits,” but it’s not a redeeming feature. I can’t even say that she had good intentions, because her girl-power rhetoric is inextricably linked to alienating Women of Colour. We need to talk about this.

There is a lot more to this than I can articulate. Here are a couple of posts that mention aspects of Lily’s racism and sexism that I highly recommend reading, sharing and responding to.

“… in her indictment of mainstream/pop/Hollywood culture, she is also insulting the black culture they ripped it from (much like Lorde). I will twerk until my ancestors wake up and join me, and she better fucking respect me.” …Read More

“Another case of white women using black women as props so that they can “make a statement”. I’m really just bored with white female artists at this point.”  …Read More (an amazing and important blog – please check it out.)

“The line ‘I won’t be bragging bout my cars, or talking bout my chains/don’t need to shake my arse for you cos I’ve got a brain’ means she can join Lorde and Macklemore in the bin for White People In 2013 Who’ve Written Songs That Condemn and/or Parody Materialism In Hip-Hop As Though They Have Any Right To (and as though there aren’t deep-rooted historical reasons as to why lots of rap music revels in opulent wealth). Gimme goofy, endlessly loveable 2Chainz snarling BOUGHT A NEW CRIB JUST TO FUCK YOU IN over this puritanical shite any day.” …Read More 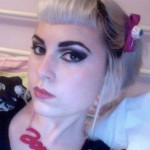 Lily Edelstein is a 17 year-old student, artist and feminist. She has been published in the Destroying the Joint anthology edited by Jane Caro, and has been an avid writer since childhood. She blogs about her art and zines, encompassing intersectional feminism, the importance of creativity, and her passion for goth.