Last week, along with eighteen other young women from Sydney Uni, I had my vagina photographed to make a political statement on the front cover of Honi Soit, Australia’s oldest running weekly student newspaper.

Soon after we had the photos taken, we were told that if our vaginas were published and released without censorship (the very thing we were supposed to be fighting), the SRC could be facing a legal battle it could not afford.

Honi Soit had no choice but to agree to censor the vaginas, in the process proving the importance of this project. Here were our vaginas in a completely non-sexual context, showing all of their beautiful diversity, and once again, no one was to see them. 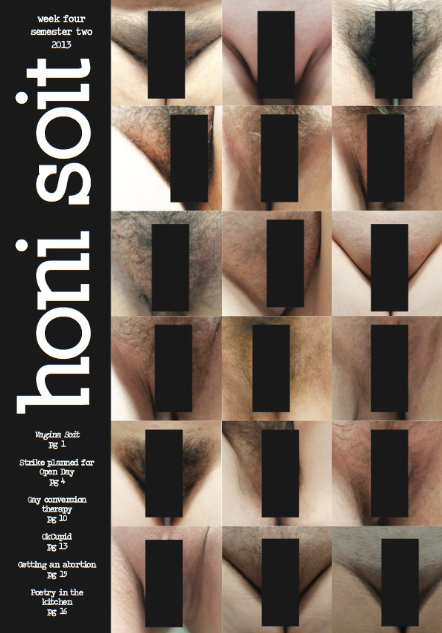 Until I saw the uncensored versions of the vaginas, I didn’t even realise myself how different they could be. The fact that as a woman with a vagina I didn’t know they could be so wonderfully varied from each other just goes to show the extent to which personal ignorance is forced upon us. It also demonstrates how accustomed we are to seeing only one type of vagina: neat, tidy and boring-looking.

But Australian law states that published vaginas must be healed down to a single crease, which means that almost every vagina you see in the media has been censored and/or airbrushed – you’ll never see any ‘bits’ hanging out. You can imagine that this leaves many women feeling like they are abnormal. As the uncensored cover of Honi Soit showed, no two vaginas are the same. But to avoid legal prosecution, Honi Soit censored every one of the 18 vaginas with a black rectangle.

However, when the magazine was released, a blunder was discovered. The black rectangles which had been added to cover the vaginas were far more transparent than was intended. The copies were quickly taken off the stands.

Honi Soit published a post on its Facebook page explaining the motivations that led to them pursuing the project:

The vaginas on the cover are not sexual. We are not always sexual. The vagina should and can be depicted in a non-sexual way – it’s just another body part. “Look at your hand, then look at your vagina,” said one participant in the project. “Can we really be so naïve to believe our vaginas the dirtiest, sexiest parts of our body?”

We want to feel normal; we don’t want to feel fearful when we have a first sexual counter with a partner who may judge us because of our vaginas.

Here they are, flaps and all. Don’t you dare tell me my body offends you.

It makes no sense to me that in this day and age, vaginas are still held to mythical standards of beauty – soft, hairless, and white. The reality of vaginas is that some of them are hairy, sometimes prickly, sometimes dark, sometimes pinkish. Some women’s labia poke out, some don’t. But mostly, vaginas are always treated as some great, big, shameful secret.

As young women, we already have enough to worry about when it comes to body image.

Young women are growing up in a society which is so concerned about the way we look. We are expected to be thin, well-dressed, and perfectly made-up. Add to this the pressure to have a picture-perfect (ha!) vagina that we already feel too ashamed to talk about, and it’s no wonder so many young women feel insecure.

Honi Soit has admitted it did not foresee how big a legal issue the cover would become. The images have been deemed in breach of s 578C of the NSW Crimes Act because they are “indecent”.

But I don’t think a natural, normal-looking vagina is indecent. Not in the slightest.

Birdee believes that this image should be published, and seen by everyone. Here is a link to the uncensored cover which was tweeted by Honi Soit Editor, Lucy Watson. 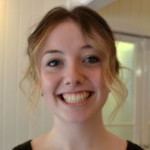 Lily studies philosophy and sociology at Sydney Uni. She identifies as a vegan and feminist, and will probably be very quiet if you ever meet her because she tends to observe rather than engage. However, if you’re ever alone together, you will probably be bombarded with an intense array of questions, which may make you feel uncomfortable. But never fear – she swears it’s only for curiosity’s sake. People are fascinating. You can read more of Lily’s writing on her blog.