We’ve all heard the famous Neale Donald Walsh quote: “Life begins at the end of your comfort zone”.

For a long time when I heard or saw this phrase somewhere I’d dismiss it right away; I mean, what’s fun about being uncomfortable? Isn’t life meant to be all about staying safe and at ease? Lately though, I’ve come to realise that perhaps good old Neale was onto something. Maybe the only way for us to truly live is to take some risks and challenge ourselves every now and then?

I think a big part of my rejection of Neale’s philosophy was due to the influence of my anxiety disorder. When you’re constantly worried about the potential outcome of a situation and unable to wait until it’s over, it’s kinda hard to appreciate deliberately taking a chance on something. For the better part of last year, and long before that, if I did go to places like school or shopping I’d do what I had to do and then hurry back home where I felt safe again. It became a pattern, and an addictive one at that. 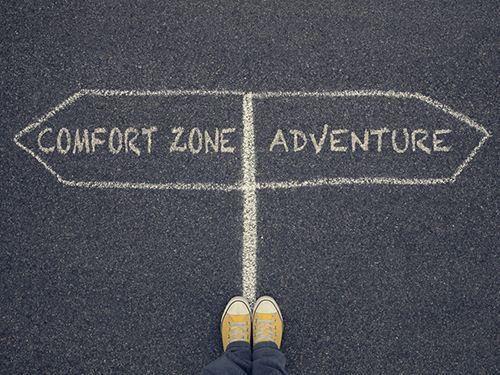 As much as I was grateful for the support and care around me, recently I’ve realised that maybe I’d be better off if I put myself into an environment or situation where my safety networks weren’t around. Sure, the thought scares me a little, but I also know that I don’t want to rely on the crutches of being close to home, calling someone for help or walking instead of catching the crowded train forever. I’ve now reached the stage where I’m bored enough of the way I’ve been doing things to think about changing them.

And of course, the idea of change scares all hell out of me! I’m definitely not going into this with abandon; I’ve still got my fears. Fears of being on my own, fears of starting my own business, fears of everything really. But I think that if I’m feeling more excited than I am terrified then that probably means I’m making the right decision. With my current course finishing up soon, I’ve entertained the idea of studying overseas next year. I have family on what is quite literally the other side of the world, so it’d be a massive sea change!

Despite the things I’m worried or concerned about, I’m also thinking about the independence and self-growth I could potentially gain from making this change. I think being at the end of your teenage years is a tricky age: on the one hand you’re technically an adult, but on the other you still feel like a five year-old sometimes. But perhaps it’s exactly the right age to be doing something a little crazy. 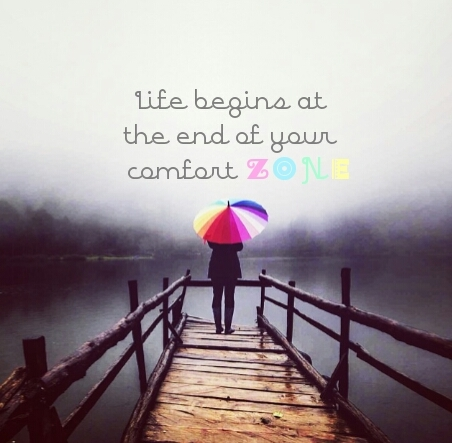 I was watching an episode of Happy Days the other day and Chachi was entertaining the idea of going into music. Despite the riskiness of a career like that, Chachi said something that I think many of us young adults should consider: “I’m eighteen and I figure now’s a good time to take a long shot”. Rather than thinking we’re not ready to do something because we’re still young, maybe we should be thinking about giving it a go instead?

I think we all know from past experience that even if change seems upsetting at the time, looking back, there’s a reason for it, and often it leads to something amazing.

As per Neale’s instructions, we’ve all just gotta be brave enough to take that first step out of the so called ‘comfort zone’. 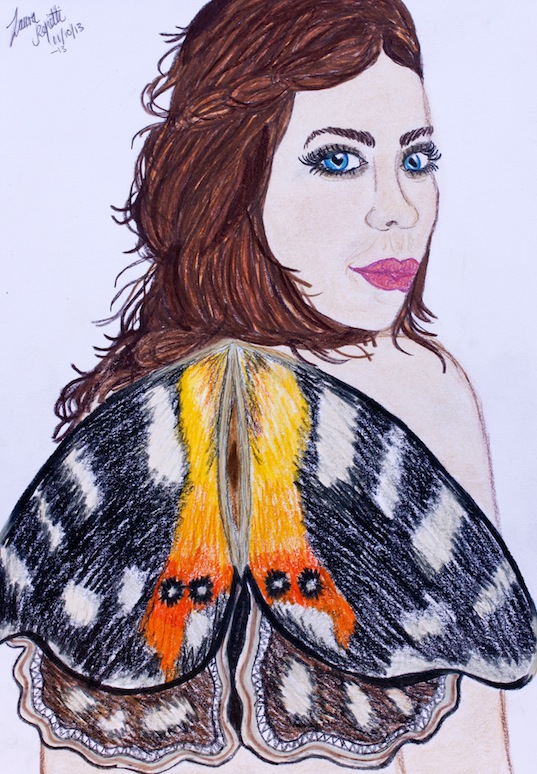 ‘Taking Flight’ is a piece about where I am now in regards to taking risks and making changes. I’ve got  this set of beautiful (metaphorical) wings that want to take flight and do anything and everything! But there’s still a part of me that’s looking back, influenced by past fears and insecurities. This drawing (done in Prismacolor & Derwent colour pencils and Mont Marte Pastel Pencils) reflects how I’ve been cuddled up in a cocoon for some time, but maybe I’m finally ready to spread my wings and fly.

Have you stepped out of your comfort zone lately? What happened? 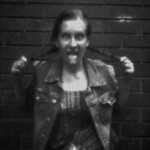 Laura is an 18 year-old artist from Melbourne. She loves many kinds of art including (but not limited to) writing, drawing, painting and crocheting. She’s studying photography right now but dreams of studying drawing at an art college in the USA sometime soon. Laura has an anxiety disorder that she now lives with confidently, hoping to inspire others to do the same. She watches too many TV shows to count, Instagrams at least once a day, listens to country music almost constantly and loves nothing more than chocolate-chip cookies in front of an episode of Happy Days.