All around the world women are doing wonderful work in the name of ecofeminism to help heal the environment and fight the patriarchy. But what is ecofeminism, and what impact is it actually having on climate change?

Just when you were thinking the patriarchy couldn’t possibly be anymore of a dick, guess what else it might be responsible for? Climate change. Yep, even the entire natural environment can’t escape the dominance of men.

This is the basic premise of ecofeminism. This relatively recent movement draws parallels between the oppression of women and the destruction of the environment which, when you think about it, makes a lot of sense.

The philosophy of ecofeminism is based on the idea that the oppression of women follows a similar pattern to the oppression of nature. By pointing out these parallels, Ecofeminists propose that we merge issues of feminism and ecology together to create a stronger resistance to oppression.

Ever noticed how women are associated with inherently natural adjectives? Women are often depicted as spiritual, natural and earthly. They are the “body and emotion”. Likewise, nature is also given feminine attributes – as in ‘fertile earth’ or ‘mother nature’. Meanwhile men are free to enjoy associations with reason, power, mind and might. Historically, while men are seen as the active, women and nature are the passive, to be moulded and controlled. 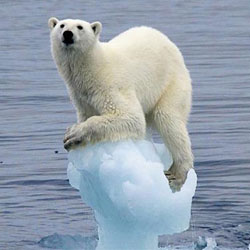 The logic of domination

This way of thinking is known as the logic of domination. One of the key modern philosophical thinkers in the field of ecofeminism, Professor Karen Warren, argues that the logic of domination has historically justified the belief that women and the environment are there to be dominated and controlled by men.

Think about this in terms of the relationship between patriarchal society and nature: historically it has been one of control and domination. We cut our grass, fence off our gardens, control our crops with chemicals and modern farming techniques, and cage up our animals and manipulate their breeding, their mobility and their death for our consumption.

The ecofeminist solution to climate change

Even the way we manage climate change obeys this premise. Climate change is often seen as a problem to be solved with science and technology. However, in order to reduce emissions, humans need to change the rate at which we consume and produce waste. Ecofeminists believe that instead of trying to fix global warming solely with science and technology, we should be focusing on an ideological approach that disregards domination, exploitation, and colonialism and takes into account interspecies justice and a consideration of the larger environment in which these problems take root.

Ecofeminism argues that in order to eradicate sexist oppression, we must first eradicate all forms of oppression that suffer by the logic of domination. Ecofeminism seeks to critique male bias and develop non-masculine ethics – doing so accentuates values such as care, trust, kinship and kindness, which are undervalued in mainstream environmental care practices. 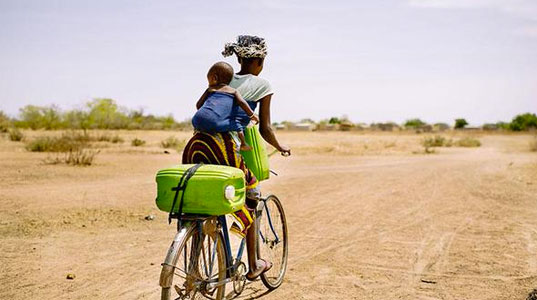 Can men be ecofeminists?

When we talk about the patriarchy and patriarchal society, it’s important to note that we are not talking about the general population. These terms refer to the ways society has been shaped to have a male bias that works on the logic of domination. Just as men can be feminists, men can also be ecofeminists.

The gender inequality of climate change

Women and children are 14 times more likely to die as a result of climate change through gendered social responsibilities, particularly in the global south (global south refers to the developing world, and global north to the developed world. Ecofeminism discourages the idea of a country being defined by its technological developments). On top of this, 70 per cent of the 1.5 million people living below the poverty line are women, making them increasingly vulnerable to extreme weather conditions.

In many cultures women are also more vulnerable to severe weather – a symptom of climate change – because they tend to be housebound due to their care-giving responsibilities to children and elders. Even in the global north, during the aftermath of Hurricane Katrina in the US 80 per cent of the victims left in the city were women because they made up the poorer part of the population and didn’t have the means to leave. Reports of sexual assault and domestic violence skyrocketed and at least six women’s shelters were destroyed, making it harder for victims to seek help. 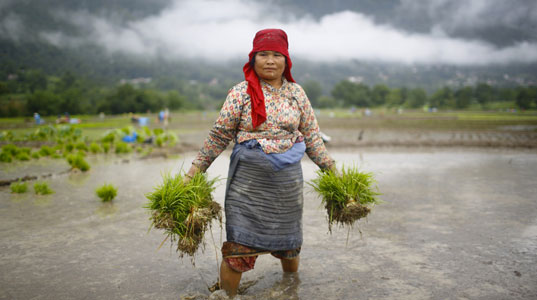 Female farmers in the developing world will bear the most severe impacts of climate change. (Reuters/Navesh Chitrakar)

One of the more prominent examples of ecofeminist action took place in 2012, when a group of five elderly Mexican women in Cherán took a busload of AK-47 wielding, illegal loggers hostage. The loggers had destroyed 70% of the town’s oak forests that sustained the local economy and indigenous culture for centuries. Not only did the women activists expel the police force and politicians (who had been turning a blind eye to the loggers), but they also closed the roads and assumed control over the town. The Mexican government now recognises Cherán as a legal self-governing, indigenous community. The first task they chose upon taking control of their land? To plant a thousand trees. 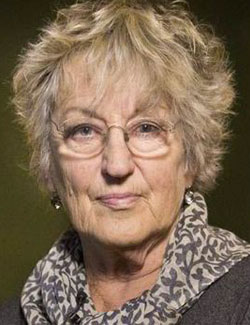 Many other women around the world are doing wonderful work in the name of ecofeminism to help heal the environment and fight the patriarchy. In Kenya, the Green Belt movement empowers women in their communities to conserve the environment and improve their livelihood, while the Chipko movement in India inspires women to reclaim and protect their surroundings. Even Australia’s own Germaine Greer has jumped on the bandwagon, giving a lecture at the University of Melbourne last year about the importance of ecofeminism.

There’s hope for the future, and for the UN Climate Change Conference being held in Paris at the end of the year. In fact, Laurent Fabius, the incoming president of the conference, has already established the importance of integrating gender issues into climate change policy: “The conclusion is simple,” Fabius said in March. “Combating climate change means fighting for women’s rights.”

Ecofeminism in your own backyard

Practising ecofeminism is simple: all you have to do is look at your day-to-day activities and think, what is the most ecological way I can do this? Looking at your consumption and waste is a good place to start. Avoid plastic, buy more seasonal, locally grown foods, avoid chemicals when you can use natural alternatives instead, and cut down on driving if you can.

Ecofeminism is all about the choices we make, it’s about changing our ideology and looking for alternatives that have as little environmental impact as possible. We need to start working with the environment, not against it.

When it comes to climate change, women are taking the lead and getting stuff done (as we tend to do). We’ve already seen women in the global south changing the game when it comes to land management, but let’s face it, the global north’s approach just isn’t working. So let’s take a leaf out of the ecofeminism’s book and alter the way we look at climate change. Remember, it only took five old women with a hell of a lot of passion to spark a revolution in Cherán. 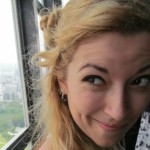 Alexandra Coulton is a Journalism and International Politics student at the University of Wollongong. She’s a freelance writer who likes to write about things that makes her angry. Like the patriarchy, or people who don’t like cats. Her hobbies include falling over things, having car troubles, unidentified bruises and not knowing what to do with plants. Follow Ali on Twitter: @a_coulton.